The Candidates for POST-UTME screening forms are to access their forms online through the College website after the payment of a non-refundable fee of Two Thousand Naira (N2.000.00)only. 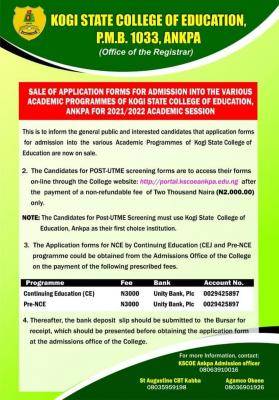 NOTE: The Candidates for Post-UTME Screening must use the school as their first choice institution.

Kogi State College of Education, Ankpa was established in July, 1981 as an Advanced Teachers’ College and shared the present temporary site with its original Occupant, the Government Teachers’ College, Ankpa, later transferred to Abejukolo.

The College remained on this temporary site since its inception. Lecturer began in November, 1981 with 185 Students in 14 subject combinations and 11 academic departments.

The College was affiliated to A.B.U., Zaria, after the University conducted and approved the affiliation inspection in Mach, 1982.

In April, 1986, on the directive of the State Government, the name of the College was changed from Advanced Teachers’ College to College of Education. This change of the name of the Institution was greater roles in its teacher-training programme.

In 1993/94 academic session at the instance of the National Commission for Colleges of Education (NCCE), established by the Federal Government, the College de-affiliated from A.B.U., Zaria. Some years after the creation of Kogi State, the College was renamed Kogi State College of Education, Ankpa