Are you writing the 2022 Waec Exams? Are you searching on How to Get Waec 2022 Commerce Answer? Are you looking for legit and sure Questions answers especially for Commerce?

(1a) The workshop uses “Division Of Labour” production process.

(2a)
The type of merger to be formed is “vertical merger” or “vertical amalgamation”. The firms or companies come together at different stages of the production from the raw material to the finished product.

(2b)
(i) A possible reason for the merger is for guaranteed supplies or outlet
(ii) By coming together, the combination of greater resources may help in securing the economics of larger-scale production. This will reduce unit costs and increase profit
(iii) The companies could have merged to increase the efficiency of management where the acquired company is poorly managed
(iv) The companies could also have merged to reduce federal income tax liabilities.

(3b)
(i)Protecting the interest of the Member and Government Advisor
(ii)Development of trade, commerce and industry
(iii)Removing odd or unfair competitions
(iv)Creating and Maintaining Favorable Business Environment

(3c)
(i)Providing the government with a veritable forum and deal with safety and health at work place and working environment
(ii)Promote collective bargaining at different levels and take up projects for social and family welfare.
(iii)Bring a unified employers’ viewpoint on the issues of industrial relations to the government in a concerted manner
(iv)Train and develop staff and members and Obtain data on wages and conditions of work in industries attached to them.
======================

(4b)
(i) Microphone: It is used input sound that is then stored in a digital form
(ii) External webcam: It capture images and videos and then send them onto your CPU
(iii) Flash drive: It is used for storage, data backup, and transferring files between devices.
(iv) Keyboard: It is used for putting information including letters, words and numbers into your computer.
(v) Light pen: It allows a user to point to display object or draw on the screen in a Similar way to a touchscreen but with greater positional accuracy
(vi) Joystick: It is used for controlling the movement of the cursor or a pointer in a computer device

(5b)
(i) Acceptance credit: This is a type of letter of credit that is paid by a time draft authorizing payment on or after a specific date, if the terms of the letter of credit have been complied with.

(ii) luncheon voucher: It is a voucher for a meal given to employees as an employee benefit, allowing them to eat at outside restaurants, typically for lunch.

(iii) Bill of exchange: This is an unconditional order in writing, addressed by one person to another, signed by the person giving it, requiring the person to whom it s addressed to pay on demand or at a fixed or determinable future time a sum certain in money to or to the order of a specified person, or to bearer.

(i)Hire purchase facilitates the promotion of durable goods
(ii)The profit will increase as a result of increase in price.
(iii)Hire purchase increases the rate of turnover.
(iv)It leads to large scale production as a result of increase in demand.
(v)The seller can repossess the goods in order to avoid bad debt.
(vi)The seller retains ownership of goods until full payment is made.

DISADVANTAGES
(PICK ANY THREE)
(i)A lot of capital can be tied down.
(ii)Customers may fail to pay their debt which may become bad debts.
(iii)Court action for recovery of debts usually brings additional cost.
(iv)Goods repossessed may be difficult to sell.
(v)It can lead to court action.
(vi)There is the possibility that a buyer may run away with the goods.

(6a)
-International trade payment method-
(i)Cash in Advance; The cash in advance method is the safest for exporters because they are securely paid before goods are shipped and ownership is transferred.
(ii)Letter of Credit; A letter of credit, or documentary credit, is basically a promise by a bank to pay an exporter if all terms of the contract are executed properly.
(iii)Documentary Collection; A documentary collection is when the exporter instructs their bank to forward documents related to the sale to the importer’s bank with a request to present the documents to the buyer as a request for payment.

-Home payment trade-
(i)Cash payment; This is where payment for goods and services is made using notes and coins.

(ii)Cheque; A cheque is a written order by the account holder to his bank to pay on demand a specified amount of money to the named person or to the bearer.

(iii)Bill of exchange; This is an unconditional order, made in writing, addressed by one person to another, requiring the person to whom it is addressed to pay on demand, or at a stated future date.

(6b)
(i)Differences in Technology; Advantageous trade can occur between countries if the countries differ in their technological abilities to produce goods and services.

(ii)Differences in Resource Endowments; Advantageous trade can occur between countries if the countries differ in their endowments of resources. Resource endowments refer to the skills and abilities of a country’s workforce, the natural resources available within its borders (minerals, farmland, etc.), 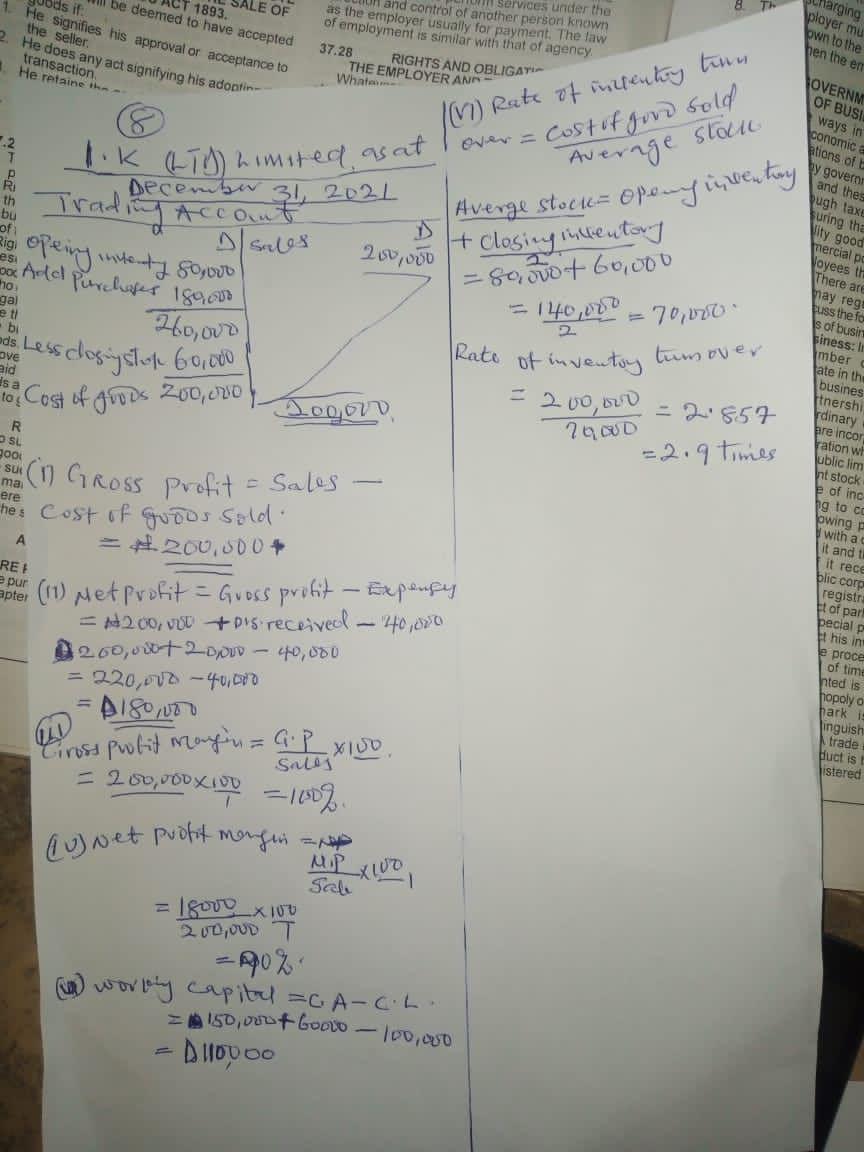