The book “Life Changer” written by Khadija A. Jalli is the JAMB novel for 2022 UTME/DE Candidates. Regardless of the course, you are applying to study and the mode of the examination, all candidates will be tested on this new book. Candidates are to note Summary of life changer that about 15 to 35 questions will likely come from the recommended compulsory novel in the use of English exam questions. 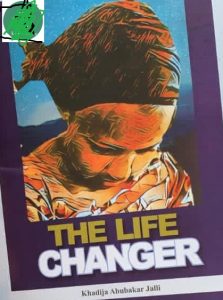 The new book will be given to candidates at the point of registration in any of the 2022 JAMB accredited CBT centres after candidates had paid and obtained the JAMB e-registration PIN (at the cost of N3,500 plus an additional N500 for the book).

The book is a novel that changes the narrative of life on campus. Laced with underlying optimism, the book upholds the tenets of hope and redemption in the lives of our youth.

The story follows the escapades of Salma and her roommates in the university as a swim in the turbulent and seamy tides of academia.

The Life Changer is Khadija Abubakar Jalli’s first publication and she seems to be saying that the female voice is making a rebound on the parapet of the African literary scene.

Khadija holds a B.Sc (Ed) Mathematics degree. She is an entrepreneur and CEO of She’s Boutique Afrique. Khadija Abubakar Jalli is married with children.

The Life Changer is Khadija Abubakar Jalli’s first publication and she seems to be saying that the female voice is making a rebound on the parapet of the African literary scene.

Based on popular demand, we have provided a soft copy of the book in PDF. UTME Candidates can download this on their phone, computer system, or tablets and read it anywhere. Please note that you need a PDF-enabled device to be able to view and download the book.

Summary Of The Book Life Changer: Chapter By Chapter

A family of six awaits the arrival of Mr. Esquire. While they wait, Bint gives an account of her classroom encounter with her intrusive Social studies teacher, Mallam Salihu, who is known to act as though he knew a bit more about every subject as he will often ask questions outside the subject of discussion. Bint narrates how she genuinely handled a similar occurrence leaving the teacher dumbfounded by the cheering and laugher of other pupils.

Ummi is seamlessly proud of her daughter, particularly, Bint’s intelligent approach to issues and she joins in the discussion right before Omar joyfully announces his admission to study law at the Ahmadu Bello University. As the family gathers to celebrate Omar’s success, Omar boasts of his achievement and takes pride in solely overcoming examination challenges and several other entry procedures while seeking for admission. Ummi recognizes her son’s naivety and tries to enlighten him about the life-changing capability of university admission.

Ummi tells her children how her admission changed her.

Twenty years ago, Ummi gains admission into the university and gets married to her husband even before she starts her registration. Ummi tells them about the freedom and the carefree life of students in the university, the difficulty in distinguishing between teachers and students with females dressing almost naked, and how some faculties are required to be on dress codes. Ummi further discloses her experience with Salma, a sophisticated young lady.

Salma goes for her registration much later than everyone else but expresses discomfort and irritation about the delay in the registration process. Salma is interrogated by a young man on the queue and he continuously engages her in a discussion but Salma continues to criticize and overgeneralize her opinions about lecturers. Salma does not only create a similarity between lectures and policemen as personalities that can be bribed, she also boasts about her ability to win the lecturer’s favour if she gives him as low as two or three thousand naira. Unknowingly to Salma and to the astonishment of everyone on the queue, the young man she has been conversing with is the lecturer in charge of the registration procedure.

Ummi proceeds to her departmental registration and she is directed to the HOD’s office. The HOD is seen exchanging endearing pleasantries with Ummi which she finds rather discomforting and inappropriate. Ummi assumes the HOD is trying to make a pass at her. She indeterminately manages to accommodate this until she is given her matriculation number and leaves the office irritated and angry. On getting home, Ummi tells her husband about her experience at the HOD’s office but she is astounded to learn about the friendship and rapport between her husband and Dr Sam John.

Ummi tells the story of ‘the quiet one’, a boy named Talle. Talle is given birth after many years of child futility and his birth causes the death of his mother. He grows up possessing a silent character and becoming even more reticent with the death of his father and stepmother, thus, ‘the quiet one’ was a perfect description.

Talle is considered a good person by the villager and unable to cause harm. However, Talle needed money at a point and confides in Zaki who proposed the idea of abducting a boy and requesting a ransom. The plan is executed by the duo and Talle restrains the boy in his house. Talle goes to the market for his groceries but his usual request for food items is doubled. Soon, the market woman notices a change in his larger request for groceries and reports the issue to the District head­­. While Talle is being interrogated by the District head, policemen rampaged the palace and arrest Talle as a suspect for kidnapping and extortion. Talle and Zaki are eventually sentenced to some years of imprisonment.

This chapter gives a further account of Salma’s splendour and pomposity. Salma goes to Dr Debo, the level coordinator, to have her forms signed. Unfortunately, Dr. Debo loses touch of his many years of discipline and makes advances towards Salma. Salma arrogantly dismisses his attempt and further insults him before leaving the office. Dabo is left is a state of regret and he remorsefully prays to be vindicated from the impact of what he has created.

Salma completes her hostile registration and moves into a room occupied by three other girls. Initially, Salma does not like the sight of her roomies but eventually, they begin to grow fond of each other and form an intimacy they regard as sisterhood.

On a faithful evening, Salma is offered a ride in a Mercedes Benz by two men, Habib and his driver, Labaran. She slides in knowing it is dangerous and she conceitedly plots a scheme to decline Habib’s request to date her if he eventually proposes.

Having to decline a man that rides Benz is Salma’s way of upgrading her standard and getting recognition and respect from her colleagues and the entire university.

In this chapter, it is discovered that Salma gives Habib Tomiwa’s mobile line instead, and unknowing to Habib, he calls Tomiwa to go out on a date with him. Tomiwa is curious about Habib and decides to go out on a blind date but eventually discloses the switch in mobile lines. Habib likes her still and shops for her and her roommates. He also gives Tomiwa some money for herself and her roomies. She is elated and her roommates shared in this happiness. At first, Salma agitates against Tomiwa’s approval of Habib and accuses her of being a chameleon. Ada and Ngozi intervene but the issue escalates. They soon come to a state of tranquillity as soon as someone knocks at the door. They do not want to have to share their lots with other neighbours.

Meanwhile, Salma and her roommates continue to excel in their separate departments and prepare for General studies papers.

Salma finds Moral philosophy very difficult. She, however, prepares by practicing past questions and answering them offhand. Unfortunately, Salma is unable to answer any of the questions during the examination as none of the topics for which she spends the whole night preparing had come out. She resolves into indulging in examination malpractice. Kola provides answers to some of the questions in a note as she copies them into her answer booklet. Regrettably, she is caught by a female lecturer.

Salma is compelled to fill out the Examination Malpractice (EMAL) form and she is ushered to the HOD’s office. He transfers her case to the Exams and Ethics committee for further processing. Salma and Kola are expelled thereafter.

Salma goes to Habib to help her influence the committee by using his position as a politician. Habib offers to involve Dr Debo but due to her past experience with the lecturer, she declines this suggestion and proffers bribing. Habib offers to give Salma some amount of money to bribe the chairman of the Examination and Ethics Committee (EMEC) but in return, she must repay in kind. Salma is reluctant to accept this offer because of her affair with Labaran and she considers it unfair to have an affair with her friend’s man. Salma soon gives in to his request but unluckily she gives the money to Dr. Kabir, who claims to be the chairman of the EMEC. She soon finds out she has been deceived by Dr. Kabir who was neither the chairman nor a member of the Committee. She is demoralized and breaks down.

This chapter reveals the true identity of Mohammed Kabir, a laboratory technologist employed by the University. He has been nicknamed Doctor since secondary school and has always been referred to as Dr. Kabir.

Labaran discovers Salma has been played by the gambler and informs Habib suggesting Zaki be contacted to handle the situation. Honourable Habib is skeptical about involving Zaki owing to his failure in the first mission of abducting Alhaji Adamu’s son. Habib yields to Labaran’s suggestion and contacted Zaki to trail Kabir.

Kabir is spotted at a gambling spot. Kabir wins the game at the gambling spot and leaves to avoid losing it all. Sadly, he is trailed by thugs whose mission is to retrieve Kabir’s wins. Zaki catches up with Kabir as he is being attacked by the thugs. Zaki strikes the thugs and gains control of the situation as they flee. He then concentrates on Kabir, collects the money, and left him bruised.

Ummi also tells her children how Salma changed her immoral ways. Salma becomes serious and decent after the death of her father and because of her level of seriousness Ummi allows Salma to become friends with her.

Ummi also reveals Salim’s resentful experience with smartphones. Salim confesses to Lawal about a girl he meets on social media. After several exchanges of pictures, chats, and affection Salim visits Natasha according to her preference. Unconsciously to him that he is being tricked by Natasha, he embarks on a journey to see her late in the night. On his arrival, she joins him in the front seat of his SUV, and Salim is captivated by her beauty. He is eventually ambushed by gunmen who try to rob him of his possession. Luckily for him, he escapes this only to get involved with another lady he meets on social media.

This time he pleads with Lawal to accompany him to avoid similar contingency. Lawal declines and he goes to see the supposed beautiful girl. Salim leaves in disappointment and meets an ugly girl instead.

The children are seen proclaiming admiration for all the stories relayed to them by Ummi as they await daddy’s arrival.

End of Summary of life changer by Naijaclass.com